Indian Weddings Home Remedies Ayurveda Vastu Yoga Literature
This short write up traces the evolution of Yoga in the west. It also examines Yoga in the context of west.
Yoga : Yoga in The West

Yoga in The West 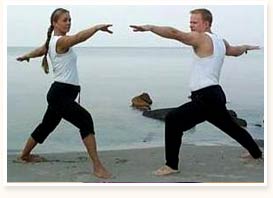 Yoga is basically a primeval Indian art. It is meant for the enlightenment of spiritual intelligence and achievement of physical fitness. It is a precious resource of knowledge, endurance, spirituality and fitness. Yoga aims to bring a 'union or merger' of one's soul and body for perfect repose, peace and self-enlightenment. Yoga basically has its origin from the 'Patanjali Shastra'. It is completely based on the metaphysical thinking of Indian culture. It is now that yoga has become equally popular with west. Sages and Saints from various parts of India have been practicing this wonderful art since centuries.

Introduction of Yoga To The West
Yoga has now become a very popular activity in the west from last few decades. Very famous Hollywood artists confess their love and passion for this art. Basically, yoga came in contact with the west during the times of Plato and Aristotle who paid ample acknowledgments to Indian values in their arts. These contacts were furthered by Alexander's arrival in India in the third century B.C. The formation of Asiatic Society quite later boosted up the concept of Indian mysticism in west which also included the wonders of yoga. The Yoga was formally introduced in the west through Sanskrit to English or Hindi to English translations of Indian epics.

Progress of Yoga In West
Modern Yoga gained momentum in the west after late 1800's after the famous disciples of Swami Vivekananda and other great gurus traveled to west and came in contact of the people of west who also inclined towards this art. Germans were the first people to explore the beauty of the Sanskrit language and Vedic mystery. Scholars like Max Mull immensely contributed in making Indian philosophy popular in west. With time several yoga masters went to west from India and brought popularity to this art in the west. Hatha Yoga then became the most popular form of Yoga in the west.

Hatha Yoga: The Most Popular Form of Yoga In West
With time Hatha Yoga has become the most popular form of Yoga in West. The Hatha Yoga has derived its meaning from 'Ha' of Sun and 'tha' of moon. It is popularly called forceful yoga because it seems to require all the physical exercises of yoga popularly known. It is said to be very balancing form of yoga aimed to balance to opposite forces in the body. The entire art of Hatha yoga is based on basic features of yoga, breathing techniques, postures and energizing the subtle channels. It also aims to increase concentration and balance the energy level in the body.