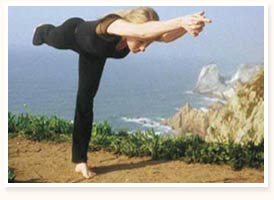 The art of right living and the foundations of yoga philosophy were written down in The Yoga Sutra of Patanjali, approximately 200 AD. Compiled by Maharishi Patanjali in the Yoga Sutras, the Eight Limbs of Yoga are a progressive series of steps or disciplines that purifies the body and mind, ultimately leading the Yogi (one who practices Yoga) to enlightenment. While the physical part of yoga is certainly of significance, the eight conventional limbs of Yoga practice have meditation of God as their underlying principle. The practice of yoga is both an art and science, which creates unification of the body and mind with the spirit.

The main objective of Yoga is to help the practitioner cultivate an awareness of self. In other words, it is about making balance and creating calmness to live in peace, good health and harmony. Yoga describes the inner workings of the mind and provides eight steps to control its restlessness to enjoy the lasting peace. Each part ultimately brings completeness to the individual. They tend to find their connectivity to the divine. Being a different individual, a person can emphasize one branch and then move on to another according to their understanding. These are the eight limbs of the system found in the famous Yoga Sutras of Patanjali.

Yama
It is known as Moral observances for interactions with others. Broken down into five wise characteristics, they tell us about our fundamental nature that of being compassionate, generous, honest and peaceful. It teaches the directives of Ahimsa (non-violence), Satya (truthfulness), Asteya (non-stealing), Brahmacharya (celibacy) and Aparigraha (non-covetousness)

Niyama
It is known as Moral observances for interactions with yourself. The word itself means rules that are prescribed for personal observance. The niyamas are far more than an attitude, and are more intimate and personal. The directive include Shaucha (internal and external purity), Santosha (contentment), Tapas (austerity), Svadhyaya (study of religious books and repetitions of Mantras) and Ishvarapranidhana (self-surrender to God, and His worship).

Asanas
It is the practice of physical postures and is the most commonly known aspect of yoga. The practice of moving the body into postures helps in improving health, strength, balance and flexibility. On a deeper level, the practice of asana, which means staying or abiding in Sanskrit, is used as a means to calm the mind and move into the inner essence of being.

Pranayama
It controls the energy, in order to restore and maintain health and to promote evolution. Pranayama is the measuring, control, and directing of the breath. It further provides perfect relaxation and balance of body activities are realized.

Pratyahara
In yoga, the term pratyahara implies withdrawal of the senses from attachment to external objects. It is most commonly known for sensory inhibition.

Dharana
Immovable concentration of the mind is the underlying principle of Dharana. The essential idea is to hold the concentration or focus of attention in one direction. The mind needs to be stilled in order to achieve this state of complete absorption.

Dhyana
Dhyana focuses on Meditation. It means worship, or profound and abstract religious meditation that involves concentration upon a point of focus with the intention of knowing the truth about it. The concept holds that when one focuses their mind in concentration on an object the mind is changed into the shape of the object.

Samadhi
It is the final step in the eight-fold path of Yoga. It means pleasurable fascination of one's individual consciousness in the essence of God. Samadhi means to bring together to merge. In this state, the body and senses are at rest, but the faculty of mind and reason are alert. You need to control the feelings of Avidya (ignorance), Asmita (egoism), Raga-Dvesha (likes and dislikes), Abhinivesha (clinging to mundane life).