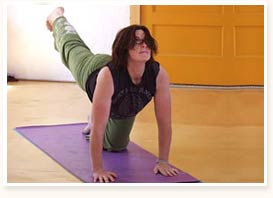 Yoga is considered the essence of a healthy life. A person practising Yoga on a regular basis not only ensures a healthy lifestyle, but also attains the much desired peace of mind. It is the greatest stress-buster and a remedy for curing a number of chronic ailments. Yoga is broadly divided into eight types. Most of them involve the use of different poses (Asanas), meditation and breathing exercises (Pranayams). In this section, we have discussed the eight prominent types of yoga, their technique and their benefits on the health of the practitioner.

Bhakti Yoga
Bhakti Yoga emphasizes on the love and devotion to the Almighty. The individual performing this type of Yoga concentrates on the existence of Almighty. He/she learns to show love, compassion to the creatures co-existing with him/her, apart from keenly worshipping the Lord. Bhakti Yoga can be practiced in a number of ways, such as praising the God by singing, chanting slogans, reading religious books, listening to prayers and by watching religious movies.

Hatha Yoga
Hatha Yoga was founded by Yogi Swatmarama in the 15th century in India. This type of Yoga is all about the combination of two extremes - 'ha' (the Sun, regarded as the positive current) and 'tha' (the Moon, regarded as the negative current). It involves the performance of physical postures (Asanas), breathing exercises (Pranayams), meditation, mudras and purification procedures known as 'Shatkriyas'.

Jnana Yoga
The Yoga of true knowledge, Jnana Yoga aims to detach the person performing it, from all the temporary things of the life. The person doing it attains tranquility, control over his/her mind, sense, faith, ability for concentration and the endurance to withstand the play of opposites by Mother Nature. By practising Jnana Yoga, the individual stays single-minded in all situations and attains self-control.

Karma Yoga
As the name suggests, Karma Yoga is the dedication of all the actions (karma) and their fruits to the Almighty. This type of Yoga purifies one's heart, and helps attain the knowledge of one's own self. The aim of a Karma Yogic (one, who performs Karma Yoga) is to provide selfless service to the poor and the needy, without expecting money, fame, power, respect and honor in return of the service.

Kundalini Yoga
Kundalini Yoga aims at drawing the untapped energy (Kundalini), coiled at the base of the spine, by using a set of technique that uses the person's mind, senses and body. Apart from the physical postures (Asanas), the person performs meditation, chants mantras in order to awaken each of the seven chakras of the body. The Asanas are coordinated with the hold of breath control.

Mantra Yoga
Mantra Yoga, as the name suggests, makes use of mantras to attain a peace of mind and increase the concentration power. The mantras are chanted by the person in a thoughtful way, in order to attain certain goals. Mantra Yoga helps eliminate a number of disorders, including psychosomatic ailments and the problems of anxiety, stress and tension. It boosts the person's self-confidence as well.

Purna Yoga
Known as integral Yoga, Purna Yoga offers wisdom and techniques for the unison of the body, mind and soul. It emphasizes the Karma of your everyday life. It involves meditation, pranayams and the performance of alignment-based Asanas. Purna Yoga is an improvisation of the traditional systems of Yoga.

Raj Yoga
Raj Yoga is the best way for the complete and holistic healing of one's mind and soul. This type of Yoga helps a person to alleviates himself/herself from the emotional and mental conflicts. Also called Astanga or eight-limbed Yoga, Raj Yoga helps the person to be in harmony with the co-existing creatures and the environment.